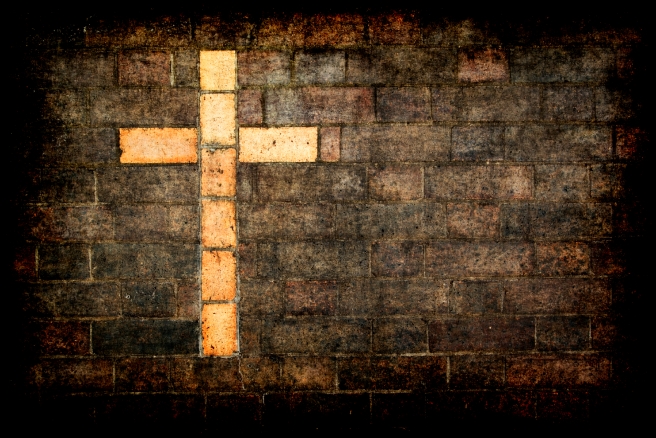 A guest post by theologian and scholar Marcus Borg – a fitting addition to our series on Atonement. (This piece originally appeared on patheos.com)

American Christians are deeply divided by the cross of Jesus – namely, by how they see the meanings of his death. At the risk of labels and broad generalizations, “conservative” Christians generally believe a “payment” understanding of the cross: Jesus died to pay for our sins so we can be forgiven.

Most “progressive” Christians (at least a majority) have great difficulty with the “payment” understanding. Many reject it. Some insist that rather than focusing on Jesus’s death, we should instead focus on his life and teachings. They are right about what they affirm, even as they also risk impoverishing the meaning of Jesus by de-emphasizing the cross.

It is the central Christian symbol. And ubiquitous. Perhaps even the most widely-worn piece of jewelry. Its centrality goes back to the beginnings of Christianity. In one of the earliest New Testament documents, Paul in the early 50s summarized “the gospel” he had taught to his community in Corinth as “Christ crucified” (I Cor. 1-2). In the New Testament gospels beginning with Mark around 70, the story of Jesus’s final week and its climax in crucifixion and resurrection dominates their narratives. All four devote more than a fourth of their gospels to Jesus’s final week. And all anticipate the end of Jesus’s life earlier in their narratives. It is as if they are saying: you can’t tell the story of Jesus unless you tell the story of the cross.

Thus for Christianity from its beginning, the cross has always mattered. The crucial question is: what does it mean? Why does it matter? What is its significance?

The most common meaning in much of Christianity today is the “payment” understanding: Jesus died to pay for our sins. Insisted upon by “conservative” Christians, it is foundational and fundamental to their theology. Its influence extends beyond. Many, perhaps most, of today’s mainline Protestant and Catholics grew up with it even if perhaps in a softer version. The language of most Christian liturgies is shaped by the payment understanding and thus reinforces it through ritual repetition.

But regardless of the verdict on that question, the first systematic articulation of the cross as “payment for sin” happened just over nine hundred years ago in 1098 in St. Anselm’s treatise Cur Deus Homo? Its Latin title means, “Why Did God Become Human?” Anselm’s purpose was to provide a rational argument for the necessity of the incarnation and death of Jesus.

He did so with a cultural model drawn from his time and place: the relationship of a medieval lord to his peasants. If a peasant disobeyed the lord, could the lord simply forgive if he wanted to? No. Because that might imply that disobedience didn’t matter that much. Instead, compensation must be made. Nothing less than the honor and order of the lord were at stake.

Anselm then applied that model to our relationship with God. We have been disobedient and deserve to be punished. And yet God loves us and wants to forgive us. But the price of sin must be paid. Jesus as a human being who was also divine and thus perfect and without sin did that.

To repeat: familiar as it is, the payment understanding is less than a thousand years old. On historical grounds, it is not ancient Christianity, not traditional Christianity, not orthodox Christianity, even though it has over the last several centuries become dominant in Western Christianity. It has become a lens through which a number of New Testament passages that seem to support it are seen. But without that lens, they can be understood quite differently.

The theological difficulties of the payment understanding are even more serious. It seriously distorts the story of Jesus and the meaning of the cross:

*Makes Jesus’s death part of God’s plan of salvation – indeed, God’s will. It had to happen so that we can be forgiven. Really?

*Emphasizes God’s wrath and that it must be satisfied. But is that what God is like?

*Makes Jesus’s death more important than his life, and thus obscures his message and what he was passionate about (for example, Mel Gibson’s movie The Passion of the Christ focuses on the last 18 hours of his life).

*Makes believing in Jesus more important than following him

*Makes Easter irrelevant. Of course, Christians who believe that Jesus paid for our sins also emphasize Easter. But there is no intrinsic connection between his death and resurrection. What matters most is that he paid for our sins.

Given the theological implications of the payment understanding, it is not surprising that progressive as well as many moderate Christians have problems with it. They should be problems for all Christians.

Marcus J. Borg is Canon Theologian at Trinity Episcopal Cathedral in Portland, Oregon.  Internationally known in both academic and church circles as a biblical and Jesus scholar, he was Hundere Chair of Religion and Culture in the Philosophy Department at Oregon State University until his retirement in 2007. He is the author of many books including Reading the Bible Again for the First Time

2 thoughts on “Christianity Divided by the Cross”