a reflection on six years of island magic

As I was kayaking on the lake the other day, a large jet flew overhead in the blue skies, and I half-expected it to break in half, strewing itself along the lakeshore.  OK, someone has been a little *too* absorbed in a certain television show.  But I knew that was the sign I had to jump into the blogosphere about the ending of LOST.

The overwhelming response I’m seeing to the LOST finale is disappointment.  Yes, everyone is sad it is over, but many feel let down with how it ended.

Why all the fuss?

Well, the finale was going along smoothly until within the last half-hour, when we realize half of season 6 took place in some sort of purgatory or after-life.  So what is the problem with that?

A couple things.  One, the writers of the show said that we would not find out in the end that the whole thing was a dream or took place in purgatory or some sort of after-life.  (So technically they were true to their word, but they came really close to crossing the line).   Second, apparently most people share the broad assumption that what happens IN THIS LIFE is what counts, and anything after that doesn’t really matter.

Now, we are all of course a bit biased on this, as all any of us have ever experienced is this life, so that explains some of it.  But I think we have a deep-rooted resentment as a society to the religious panacea of ‘heaven’ as the answer to all our ills.

Struggling with depression? Believe in Jesus and you’ll go to heaven forever.  Who could be depressed knowing that?  (OK OK, stop raising your hands).

Arguing with your spouse? Believe in Jesus, and you’ll go to heaven forever.  (Where you can argue with him or her ad infinitum).

Want to know how to raise your kids? Believe in Jesus, and get them to believe in Jesus, that way, it won’t really matter how you raise them or whether they behave or not, because you’ll all be in heaven together in the end.

OK, you can see that we could play this game for awhile.  But the point is, far too many have had this kind of thinking presented to them one too many times.  We have been told that faith (of the Christian sort) really has more to do with what happens after this life than what is happening during this life.

Sounds appealing, right?  (NOT!)  Yet that is exactly the message that American evangelicalism has been peddling for years.  Now, once in a while, they’ll make a concession and come out with a statement about something that does matter right now, like:  “this war is God’s will” or “continue to abuse the environment, because, well, heaven is around the corner” or something else clearly useful and brilliant.

When this happens (the focus on heaven), the gospels are dissociated from this life and distilled to: “believe in the right thing or burn.”  After awhile, people start to ask questions.  Questions like, “Burn where?”  or “Does hell exist?” or “Who says?” and eventually, “Who cares?”  It begins to feel a lot like the kids in M.Night Shyamalan’s The Village who are told not to go in the woods because of “those we don’t speak of”, where the monsters are merely fictional control mechanisms.

Ironically, the more you explore the actual message of Jesus, you begin to realize that he – like us – was passionate most about what happens IN THIS LIFE.  Why else would he teach us to pray about God’s will happening “on earth” as it is in heaven?  Why not just pray for us all to go to heaven?  Why would he teach us to ask for bread, the daily physical nourishment we need to live?  The sooner we stop eating, the sooner we die and go to heaven, and that must be better than a good meal.  Why would he, in teaching after teaching, focus on things like hospitality to the marginalized, peace rather than violence, generosity with money, loving your enemies?  This sounds like nitty gritty, earthy stuff.  Not spiritual escapism…

My hunch is, even Jesus would be a tad disappointed with the LOST season finale.  “No, don’t you get it, it’s not all about heaven!”

It felt like the reverse of the Matrix, where for six glorious seasons we thought we were finally unplugged and alive and free.  Something new and unknown and unprecedented was happening.  But when it all came down to it, we got plugged right back into -you guessed it-  “heaven.”

The church, with such a message, is increasingly seen as irrelevant.  To have LOST end in a church, well, it couldn’t help but feel a little irrelevant. 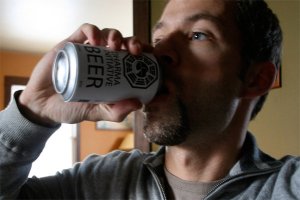 Am I bitter about it?  Well, I had my doubts going into season six, after I felt season five had presented itself as a brilliant ending to the whole show, with jughead going off and the screen going to white.  Perfect.

That would have left us asking:

What happened? I don’t know, but anything is possible.

What did it all mean? I don’t know, but anything is possible.

I was never big on having all my questions answered with this show, and sometimes felt insulted when they were.  This season seemed to try too hard to make those connections, and sometimes it worked, other times, well, not so much.

But all that said, LOST was a great ride, and I actually really enjoyed the finale up until Christian Shepherd opened his mouth.

Perhaps my criticism is a bit unfair, as much of what drew me to the show were the rich philosophical and theological overtones. Yet by making such an explicit move, it felt like they went a bit too far.  But they had to end it some way, and really, there was just too much island folklore, crazy mythology and dharma secrets to make some grand unified theory that connected everything.  I’m OK with being left hanging, and even knowing that events on the island never really ended, as Hurley was appointed the new guardian, and life was going forward from that point.  So as far as how all that went – in this life – not so bad.

But the forces of good and evil, the seeming immortality of Jacob and the mysterious Man in Black, the “rules” that governed the island, the magnetic anomaly, time travel – all of that seems to have been for nought when we wind up in heaven after all.

Yes, what happens after we die is important, but every story ends there, and somehow we thought we were witnessing something original.  Ending in heaven?  That just made LOST seem ordinary.

In any case, LOST has ended.

I guess it’s our turn to leave.

—
(But don’t give up all hope, as word on the street is that Season 7 is still a possibility)
—
(Check out this more positive take on the finale: LOST Finale Explained Well, which I really do like and is supposedly by someone connected to the show)

5 thoughts on “LOST: The Bitter End”